This is the quick-Kobox. For more information: Visit the manual.


-The Training -Income and Competition -Combat
-Shock and Guards -Club and Your Destination -One-page guide.

Kobox you´re Boxer and therefore are in charge of decisions. Your mission is to plan the strategy for each match, decide what the Boxer is going to train, select techniques that will learn and organize when you climb into the ring to fight.


You have to beat your rivals for glory, fame and fortune do you want to be the strongest boxer of the world?

Since you just start have little to choose from, so please select the exercises that most please you.
Each exercise requires that Boxer train for 1 hour. For each completed exercise Boxer increases its qualities permanently.

Also depending on the diet you follow, you get different bonuses, some are permanent and other storms. We recommend choosing foods with best permanent bond since the improvement is immediate.

Money is important so carefully to what you think you spend. At the beginning it is advisable to use it for training, eating a diet and acquire basic strokes.

Win money with your partners fan club, the sponsors and the fighting. You need it to book hours of training, to eat, to tattoo you, to equip you and to learn new techniques.

There are a variety of competitions. The main one is the classification of League. You have to challenge the rivals to climb positions and to become the category champion.

Thanks to the experience and training you can sign up for weekly official titles. For the final against the reigning champion of the title, you will have to perform better than the rest of applicants.

There are also other competitions: club tournaments, duels of fame, Historic Fights, clubs duel ... etc;
Remember that you must draw your own strategy to beat your rivals and achieve fame and fortune.

To simplify, we could say that fighting simulation is performed in two steps.

Your own pace faces to the rhythm of the opponent to decide who takes the initiative to attack (being more likely to take the initiative that has a best rate). The initial rate is the more important is for the initiative but to take combat the rhythm determined by the domain of each round. In addition it will be also influenced by special actions. By taking the initiative, your Boxer throws a punch or combination and then the opponent will have to Dodge or block.

If you dodge the coup may counterattack while blocking it will absorb much of the damage with the guard. If you are unable to or Dodge or block receives hit cleanly and cause more damage. 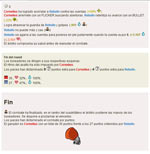 There are two ways to win a match, winning ahead of time knocking out the opponent or exhausting time and win by decision of the judges.

To win by K.O. you must hit the opponent until you can not lift off. Should you tumbes it and it will stand up you need to knock out the opponent three times in the same assault or four throughout the fight to declare the K.O.T.

If neither fighter able to end the fight on the fast track by KO, the judges who will decide the winner, his decision is based on points:

- 6 decision points are obtained by dominating the rhythm of the round.

- If your opponent imposes the rhythm of the round, you get 4 points for decision.

- Whenever it knocks the opponent 2 decision points are obtained.

- Whenever the face of rival is cleanly hit 2 decision points are obtained.

- Whenever the body is hit cleanly rival 1 decision point is obtained.

- 2 decision points are obtained to be the fighter that further punishment has caused during the assault.

- As the boxer who has more health punished the rival during the assault 1 decision point is obtained.

- The fighter who have done more damage to his rival´s body during the round get 1 point to the decision. 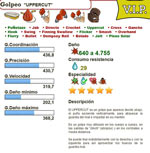 As you achieve fortune you´ll learn new strokes and combinations that spread terror over your rivals. Each blow has qualities that are trainable and have special abilities that grant extra bonuses during combat.

Having a good variety of blows is esential to exploit to the maximum the weaknesses of our rival and prevent that he can predict our next move. 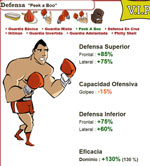 The guard is protective stance taken your fighter during combat. It allows you to absorb much of the damage of the shots that you can block.

Depending on the guard adopted you will get a number of advantages when it comes to combat. While some encourage the defensive capacity others improve the offensive capability. There are also guards that enhance the initiative. 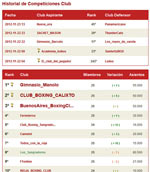 As you earn achievements clubs will be fixed on you and will offer you to enter.
Joining a club has its advantages:

- You relate yourself with other boxers in the Forum.
- You get the benefits of personnel who are contracted to the club.
- You can purchase hits and special guards.
- You will participate in tournaments and even compete against other clubs. 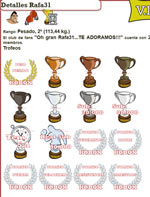 When developing your Boxer you must plot a strategy long term rather than stick only to the present. The future of your Boxer will depend on the style that you want to develop and the constancy of follow your own plan.

Set yourself achievable goals: get a blow, A Guard, improve certain quality. Don´t want to do it all in one day. It must be prepared, be patient and take advantage of the opportune moment.

As you combatas with other boxers, you will be able to understand your own weaknesses. Let experience be your most powerful weapon. Chat with other boxers and above all know a friendly rival. The great champions learn both victories and defeats.